I finished the first two divisions of my impression of the Gallian Regiment Beaujolais, led by their commander, Colonel Charles, Sieur de Beaujolais.

They are Old Glory F&IW French infantry figures (FIW-06 and FIW-08) and the mounted colonel is from the Wolfe, Montcalm, and mounted colonels pack (FIW-18).  As I wrote in my earlier post about these figures, my only real problem with them is that the officer and drummer figures are out-of-step with the sergeant and fusilier figures.  A minor problem, I know, but it still grates on my military trained sensibilities.  Of course that doesn't mean that this regiment won't be a mainstay of the Gallo-Imperial Reichsarmeeabteilung Obere-Sachsen in its operations against the forces of the Elector.

I've begun work on the color guard and third and fourth divisions.  After them will be the grenadiers and picquets for a 76-figure battalion.

This unit will have its initial baptism of fire in a F&IW game in about 2-1/2 weeks.

While I was searching for a picture of "Frivolous" Fiona at Margaritaville, I found some of the other pictures that I took at our pirate game Saturday before last.  I commanded a band of scurvy cutthroats and ne'er-do-wells whose mission was to raid the Spanish church, capture the priests, and find out (by gentle persuasion, of course!) where the treasure was hidden.  My pirates were led by "Red" Sonja, whose sharp saber and sure pistol kept order among her men.  Here are a few of the pictures I took at the game.  As usual, a click or double click will enlarge these images for your viewing pleasure.


We stopped the game at this point since several of us had to leave.  Sonja and her band would probably not have been able to escape with the Cross of Coronado, but it was fun to be able to pose with it in a picture.

For more pictures and a complete report, see the Jackson Gamer's blog.

The rumors were true!  "Frivolous" Fiona McGillicuddy (back to camera, with parasol)  was visiting Margaritaville Saturday before last during the pirate raid.  Was she just having her "Spring Break" fling or was she there for more devious reasons?  Only time (and some creative story writing) will tell.


Stay tuned for more news of Fiona and her favorite "Gentlemen Adventurers" as they continue their journeys through the 'Murican provinces.
Posted by ColCampbell50 at 10:44 AM 1 comment:

Last week I began painting the first two 12-figure divisions of a regiment of Gallian (AKA French) infantry for my Imperial army.  These figures are of the Regiment Beaujolais (a rather nice French wine, by the way).  The figures are all Old Glory French & Indian War figures from packs FIW-06 (French line command) and FIW-08 (French line marching).  I also have figures from pack FIW-07 (French line advancing) which will form the next two 12-figure divisions.  There will also be a division of 12 grenadiers and a division of 12 picquets, plus a 4-figure color party carrying the colonel's and regimental colors.

The colonel commanding is one of the French mounted officers from pack FIW-18 (Wolf/Montcalm/Colonels mounted).  He is Colonel Charles, Sieur de Beaujolais.  I still have a little work to do on him, such as shading his face and hands and painting the base.


The infantry figures are still being painted.  These two pictures are just to show how they are progressing.  I used an undercoat of light gray and then did a heavy drybrush of antique white over it to achieve my interpretation of the gris-blanc color of French uniforms.
Additional pictures will be provided when these figures are complete.
Posted by ColCampbell50 at 7:47 PM No comments:

Saturday morning I participated in the Mississippi Department of Archives and History's Rebellion and Relics program as part of the Sesquicentennial of the American Civil War.  My presentation highlighted the Civil War related items in the various collections we maintain in the Archives and Records Services Division.  While I was there, I took some pictures of some of the artifacts that our Museum Division maintains and of a few of the reenactors who were there.  All of these activities were held in and around our Old Capitol Museum.  I hope that you enjoy these pictures.  As usual, please click on each image for a larger picture.

First, some of the artifacts:


And now a few of the reenactors who set-up outside the main entrance to the Old Capitol:
There were, before I left, only two Confederate reenactors present.  There was such a crowd around their table that I couldn't get a picture.  But I will leave you with a vintage (1976) picture on Confederate Civil War reeanactors:
Posted by ColCampbell50 at 3:00 PM 3 comments:

I finally finished the second of my two 20-figure Gallian Canadien militia units.  Like the first, it is composed of one officer (Spanish from the old London Warroom, now Dayton Painting Consortium line) and 19 Old Glory Courier de Bouis.  These unit has gray shirts for a distinguishing feature.

And here are close-ups of the unit: Additionally I finally put the finishing touches on two pack camels and two pack mules that have been sitting on my painting desk for ages. These are Ral Partha pack camels, a generic one on the left and a Medieval one on the right. 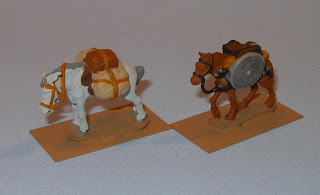 And two pack mules, generic on left and Medieval on right.  I don't recall manufacturers on these as I bought them on eBay.
Posted by ColCampbell50 at 2:26 PM No comments: