Just some snaps of my first two 15mm ACW units facing off on the battlefield.


The scenery is courtesy of my son's Battle Mech game last Saturday.  It is actually jungle foliage made from plastic aquarium plants that I've cut into irregular shapes.  But it worked as a backdrop for these "pick-up" snaps.

My second Confederate brigade is coming along, albeit a little slowly.  I'm hoping to have it finished by the weekend, along with the division command group and the supporting artillery.

I've finally completed painting my first Confederate brigade for the "On to Richmond!" (OtR) rules I'm planning on using for my 15mm American Civil War games.  It joins the Union brigade from Larry Reeves (see last post).  It only took me about three months to paint it as I had a lag in my painting mojo.

It represents the brigade commanded by Brigadier General Jonathan C. Moore of Major General John Forney's Division of the Confederate Army of Mississippi.  Although this brigade was part of the Vicksburg garrison and surrendered there on July 4, 1863, in my imagi-ACW gaming Forney's and Bowen's divisions were sent to Tennessee in the early Spring of 1863 to reinforce the Army of Tennessee.  Moore's Brigade consisted of the 37th, 40th, and 44th Alabama; the 35th and 40th Mississippi; and the 2nd Texas Infantry Regiments.  These regiments are depicted in a mix of "drab" uniforms that were common in the Western theater.  Made from undyed wool they were various shades of drab brown and gray.  A few of the figures are in the more common "Confederate Gray" uniforms and a couple have even "liberated" some Yankee pants.  The flag they fly is the Van Dorn battle flag which was originally flown by units under the command of Major General Earl Van Dorn in Mississippi and East Louisiana beginning in February of 1862.

The figures are from Old Glory 15s and are mounted on 2" x 1" Litko bases.  The flag is from an illustration of a Van Dorn battle flag that I found on the internet. 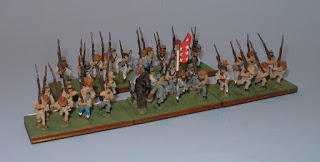 My next unit to paint is the brigade commanded by Brigadier General Louis Hebert which includes the 36th Mississippi Infantry Regiment, the unit in which my great-grandfather and some of his brothers and brothers-in-law served.  Hopefully this one won't take three months to paint!
Posted by ColCampbell50 at 1:15 PM No comments: