This is the second and final part of the pictures I took at the Colonial Barracks convention over the November 8-10 weekend in New Orleans.

The first game I will cover took place Saturday night.  Titled "The Colonel's Got to Know," it was run by Gerry Webb of Castaway Arts in Australia using troops provided by Mark Stevens.  It was based on the final scenes of the movie Gunga Din where Gunga Din and the Sergeants 3 are trapped in the Thugee temple and the British column is marching into an ambush.  Can Gunga warn the Colonel before the trap is sprung?

We had four British players and six Thugee players with each having command of a single unit.  I commanded a Thugee unit of riflemen and waited with my troops hidden among the rocks while the British marched singing merrily into our trap.

The second game was played Sunday morning.  Titled "The Real Glory," it was run by Mark Stevens and was based on the movie by the same name that starred Gary Cooper.

I hope that you enjoyed the pictures of the various games I posted.  Remember, Colonial Barracks is scheduled next year (2014), tentatively for the second weekend in November.  If you are close enough to New Orleans, please come and join our fun.  Watch for future announcements on www.sergeants3.com and on the Miniatures Page.
Posted by ColCampbell50 at 4:08 PM 2 comments:

On my last post, I opened my report from this year's Colonial Barracks convention with the battle I ran on Saturday morning.  This part of the report, which I have labelled Part 1, will cover some of the games that were played Friday night.


And while the above two games were being played, Ed got his troops sorted for his Friday night Mexican American War game "The Battle for Jalapa," which presumed that Santa Ana did not take his army north to Buena Vista but had it available to oppose General Scott's advance from Veracruz. 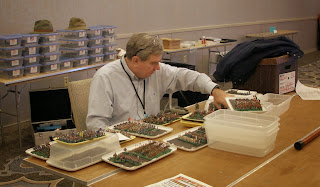 The big game Saturday night was Rich Smethurst's and Dale Kemper's "55 Days at Peking" action on the Tartar Wall above the legations.  I played in this game as a Boxer commander.


This last picture from Friday night is the 15mm Alamo set-up for Terry Sofian's "The Alamo + Rough Riders + Them" game that was run Saturday morning.  Terry used his newly released "The Hive and the Flame" rules and pitted Teddy Roosevelt and the Rough Riders defending the San Juan Mission against rampaging giant bugs from outer space.  There are several early tanks in the foreground.

That's all for now.  Further report(s) will be made to cover the other games on Saturday and the game on Sunday morning.
Posted by ColCampbell50 at 9:41 PM No comments:

Over the Veterans' Day weekend, I attended the Colonial Barracks convention in New Orleans.  Begun in 2011, this convention celebrates all things The Sword and the Flame.  Last year it expanded to include any rules written by Larry Brom, the author of TSATF, or any rules developed from his groundwork.  This year the convention "went to Hollywood" to celebrate the cinematic quality of the original game. 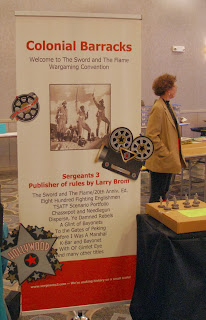 All of the games were to be based (strongly or loosely) on a movie.  There were games based on Zulu and Zulu Dawn, 55 Days at Peking, and Gunga Din, to name a few.  A fun time was had by all. 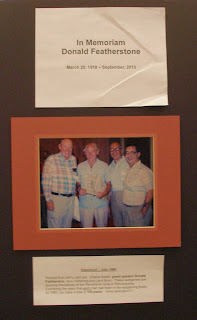 The convention was also in memory of Donald Featherstone and a poster displayed a picture of Don (2nd from left) with Larry Brom (far right), Charlie Sweet (far left), and  Jerry Ebberling (2nd from right).  Don  was the guest speaker at Historicon in 1989.  Between the four of them, they had by 1989 amassed 159 years of wargaming!

My game was very loosely based on the 1995 movie Richard III (Shakespeare's play moved to a 1930s Britain), which starred Ian McKellen and Annette Benning.  This movie was the genesis of the wargaming genre A Very British Civil War.  I explained this genre in my previous post so I won't go into it again here.

The rules used for this game are The Sword to Adventure supplement to The Sword and the Flame.  They can be acquired from the Brom's webstore at www.sergeants3.com .

The general situation centered around the small town of East Bergholt in western Suffolk, whose conservative squire had made a loose alliance with the local brewery workers' union and had gathered a quantity of supplies to tide his people over the winter.  The Royalist Eastern Division command had heard about these supplies and dispatched a field force from their Colchester, Essex, garrison to raid East Bergholt. 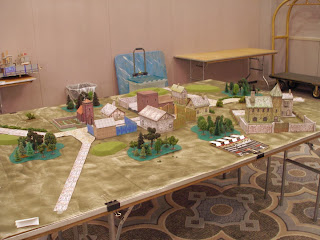 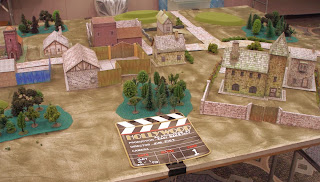 A close-up of East Bergholt showing the "clapper board" that Lori had for each of the games.  She got them for less that $1 each at a discount party store in New Orleans.  It is a clever way to designate the games. 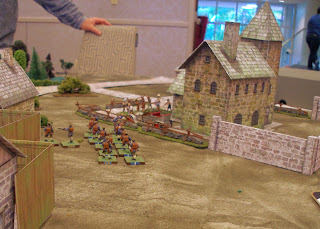 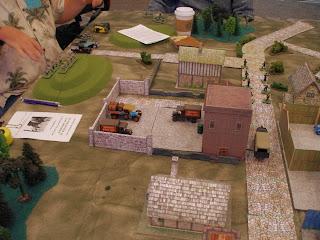 The local constabulary (on the main street) also moved closer around the pub, while a steam truck from the Harwich naval soviet parked outside the brewery.  The brewery yard remained quiet.  The BUF advanced along both sides of the secondary road leading into town with a propaganda truck in the lead.  They had two sections of infantry and a Maxim heavy machinegun. 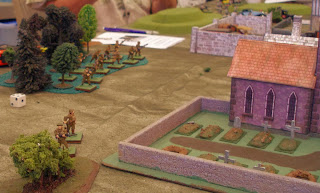 The Royalists from Colchester (a reinforced company of the Essex Regiment) advanced toward the church and the brewery (behind the church).  They had three sections of infantry, a Vickers heavy machinegun, and a tankette and armored car.

The BUF force advances closer to the pub.  In the lower left corner of the picture, you can see a constable carefully peaking around the corner.  The BUF machinegun on the hill is trading shots with the hunt club who are positioned behind a stone and rail wall.  Neither side did much damage to each other at this point. 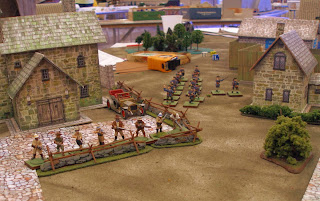 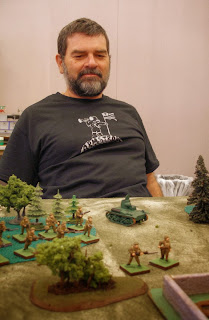 Gerry Webb, proprietor of Castaway Arts (http://www.castawayarts.com.au/) joined us all the way from Australia.  Gerry commanded the Royalist forces.  Here he watches as one of his sections and his tankette move against the town. 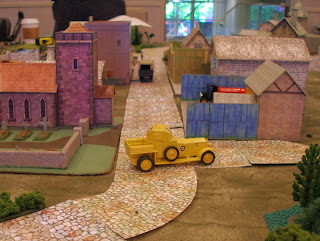 The Royalist armored car (HMAC Ajax) pulled up to block the retreat of the Harwich naval soviet truck. 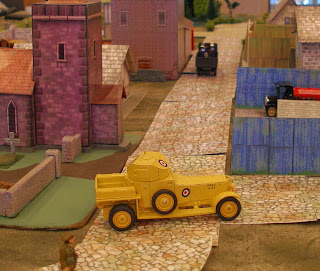 But the sailors have a surprise for the Edwardians - off comes the tarp and a 4" naval shell comes winging down the road, damaging the armored car.  The armored car's machinegun killed one of the naval gun crew in the exchange. 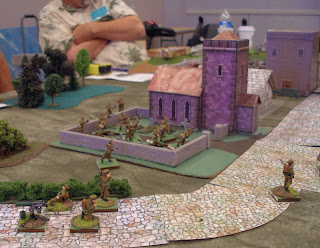 After the armored car pulls out of the line of fire, the Royalist infantry occupies the church yard and their Vickers MG team slogs up the road.  On the right is the "tail-end Charlie" of another infantry section that is following the armored car.

On the other side of town, the BUF advance is stymied by the squire's forces.  The propaganda truck and the BUF leader's car try to motivate their fellows by moving ahead. 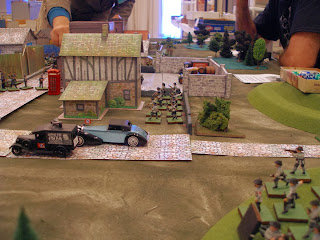 Across the road, the right flank BUF section crosses into the pub's backyard.  The constables are rallying in the main street ready to move out in response. 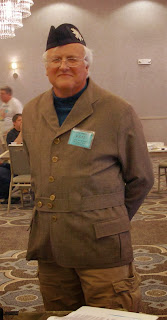 My friend, Ken, always come dressed to our conventions.  This time he was perfectly dressed for the Very British Civil War in his coatee and glengary cap.  Ken commanded the Harwich naval soviet troops.  He also posted some additional pictures of the action at East Bergholt on his blog, Flashcove's Cay (see link to left). 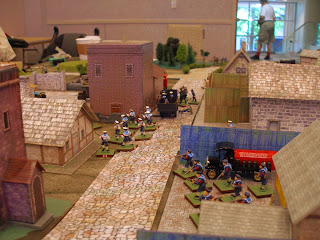 Once the Royalists got closer, the Harwich naval soviet troops come out of their hides and moved into action.  One section advances across the main street to oppose the Royalist advance against the brewery while another assembles in the yard of the local auto repair shop to contest the advance of the Royalists from the church yard. 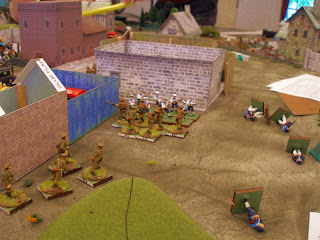 A little later in the fight, a Royalist infantry section tries to attack some sailors gathered between the auto repair shop and the town warehouse.  Three of the Royalists were stragglers in the attack so only six closed with the sailors.  Littering the ground to the right are the bodies of another sailor section that was completely shot to pieces by the armored car and the Royalist infantry. 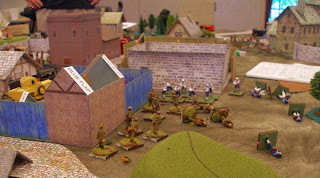 The Royalist attack didn't succeed, with the sailors prevailing in the melee.  Three of the soldiers were killed and the rest fled.

This basically ended the action on this flank.  The BUFs and the squire's forces fought each other to a standstill on the other end of the town.  The brewery workers' union finally came out after "fortifying" themselves with plenty of Brown Brewery's famous Pale Ale and held off a half-hearted Royalist attack.

But all the players had fun, which was the most important objective.

All of the buildings and most of the fencing and walls are printed on cardstock and assembled by Campbell's Construction Company.  With the a few exceptions, the figures were painted by Col. Campbell.