SINK OR BE SUNK! 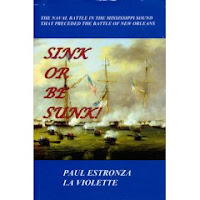 Sink or Be Sunk! The Naval in the Mississippi Sound that Preceded the of by Paul Estronza La Violette (, , Annabelle Publishing, 2002) is a slim but well written study of how the hydrography of the impacted the options of both the American gunboat flotilla and the British forces sent against them. La Violette is a Navy oceanographer and uses his training and experience, especially that of the Sound, to describe the shallows, currents, and winds that worked both for and against both sides.

The American naval presence along the coastal waters of the was miniscule when compared to the might of the Royal Navy that was gathered against them. But American Master Commandant Daniel Patterson used his small squadron (a sloop and a schooner that he kept in and five gunboats and two support vessels assigned to Jones) with the experience that he had gained in this area since he was first assigned to as a Lieutenant in 1807. His primary subordinate, Lieutenant Jones, was intimately familiar with these waters, having been stationed in since May of 1806 as a midshipman. His orders from Commandant Patterson were quite simple – observe, report, delay, and fight.

The story of the British officer, Commander Nicolas Lockyer of HMS Sophie, is just as interesting as that of Lieutenant Jones. He was involved in the disastrous action against Fort Bowyer at Mobile Bay when his ship was damaged and another British ship was lost to the American guns. Lockyer was determined to succeed in his mission of destroying the American gunboats in order to restore his good name. His energy and competence, coupled with his good instinct for the proper tactics, were deciding factors in the British victory.

When the two men finally engage in battle, La Violette’s descriptions of the fighting rival those of C.S. Forester.

The Battle of St. Joe Pass, December 14, 1814, was a tactical defeat for the Americans. But like Benedict Arnold’s naval battle on during the American Revolution, the delay Jones inflicted on the British timetable allowed General Jackson just enough time to assemble his scattered forces, build his defensive line at the Chalmette Plantation, and eventually defeat the vaunted British Army.

I commend this volume to those interested in both a fight against stiff odds and in the early traditions of the American Navy.

Posted by ColCampbell50 at 6:01 PM No comments: 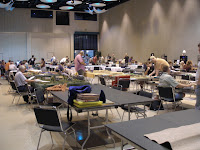 turday, I drove down to Hattiesburg, Mississippi, to attend the 2007 HUBCON convention (http://www.hubcon.org/). Hattiesburg is known as the Hub City, which is how the convention received its name. Over the years it has always been a small local convention with historical, DBM, and fantasy gamers sharing a nice sized room first in a local motel and then in the Lakefront Convention Center. We are also joined by a group of "fantasy re-enactors" (for lack of a better description). I played in two historical games and bought some miniatures, books, and buildings.
The first game was run by Ken Hafer of Metarie, Louisiana. He used the Two-Hour Wargames "Nuts!" rules to fight a WW2 scenario pitting a small German kampfgruppe against a small American task force.

I was the senior German commander and had a Panther, two halftracks (one with a 75mm howitzer), and an infantry squad. I destroyed an American halftrack, two Shermans, and an infantry squad before driving off the tabletop on my way to Bastogne.
The second game took me to Afghanistan in the late 1800s for a replay of Maiwand. Run by Mark Stevens, we used Larry Brom's "800 Fighting Englishmen" rules.

I was the senior British commander whose total force consisted of one English and two Indian battalions, two English batteries, and two Indian cavalry regiments. The Afghans were, it seemed, as numerous as the rocks in the hills. And as in the actual battle, the Anglo-Indian force was defeated with severe losses. Oh well, fun was had by all.
I got to renew wargaming acquaintances from around the deep South and bought some things from two of my dealer friends - Rudy Nelson of Time Portal Hobbies ( http://www.nelsontimeportal.com/ )
and Vince Clyant of the London War Room ( http://www.thelondonwarroom.com/ ).
More pictures have been posted on my group's web site ( www.angelfire.com/games3/jacksongamer ).
Posted by ColCampbell50 at 3:59 PM 1 comment:

Putting Down a Dance Floor at the Blue Bird

My younger daughter has finally realized her dream of opening her own dance studio. Last weekend (actually Thursday through Sunday) I helped her get her special dance floor installed. It was more physical labor than I imagined and I am just now recovering from it. Her web site is http://www.bluebirddance.org/ .

We started off by laying a vapor barrier over the bare concrete floor and then topping it with 3/4" OSB sheets that had special dense foams block glued to the bottom. Since the OSB we used is designed for sub-floors, we had to fit the tongue of one sheet into the groove of the previous sheet and insure the edges were straight. This resulted in much pounding with a small hand sledge. 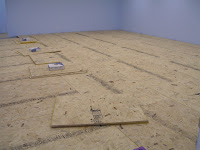 But after two and half days, we finally finished. All the sheets were down and everything was straight and fairly smooth.

The next day (Sunday afternoon) was to see the laying of the actual dance surface, a product called Marley, which is a heavy vinyl matt with a smooth surface.

In order to fit the 1.5m wide rolls so the seam in the Marley wouldn't be in the same place as the seam in the sub-floor, we had to cut a 38' piece lengthwise. That was a chore although a heavy duty box cutter made it much easier. And yes, that's me doing the cutting. 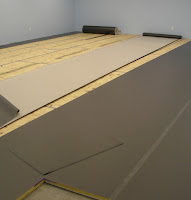 Now we had to flip the Marley so the black dance surface was up. The Marley is heavy and cumbersome, but the three of us (my two daughters and I) managed it without to much cussing and fussing.


But the final product of all our labor was worth it as the dance floor is now in and my daughter and her friend have been conducting classes all week. 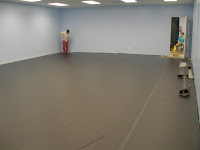 And tomorrow I drive down to Hattiesburg for a small local gaming convention called HUBCON ( http://www.hubcon.org/ ). I'll play in a few games, buy some more miniatures, and renew acquaintances from across the South. A report will be forthcoming.
Posted by ColCampbell50 at 10:34 AM No comments:

Swashing Our Buckles with Gloire

A new period in which I have become interested is Swashbuckling using the Gloire rules. I ran a rather large playtest with my wargaming buddies and then ran a game at Bayou Wars Convention in New Orleans in June 2007. The battle report for the large playtest is located at:

www.angelfire.com/games3/jacksongamer/Find_Dingus.htm
I modified the "Find the Messenger" scenario that was posted on the RatTrap Productions web site ( www.rattrap-productions.com/Gloire/Index.html ) for the play test game. It had many more players than is designed for the game, but everyone had fun and many sword blows were exchanged 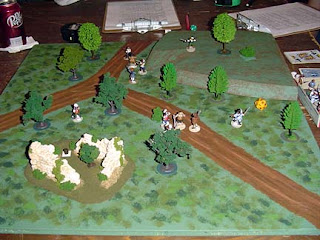 I used the "Find the Messenger" scenario at Bayou Wars with four players. It also went well and they seemed to have fun.

I made my own 2' x 2' game board out of a piece of pre-cut plywood painted a basic green. I then painted in the road in a basic brown. Using a piece of a sponge, I splotched in different shades of green to get the grass effect without flocking the board. The road was wet brushed with different shades of brown to get the effect of ruts. Even though it was a very basic terraining job, I was pleased with the effect.

My figures are a mix of Brigade Games musketeers, Foundry, and Old Glory. Here is a close-up of some of them. 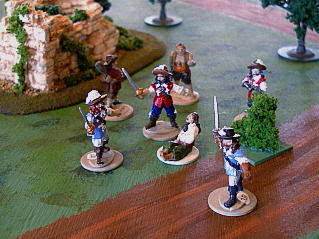