Now the rest of my currently on-hand WW2 British forces are complete.  These will get me started although I'm planning on getting at least another two sections of riflemen and some PIAT teams soon. 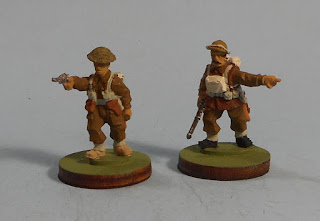 First my rifle platoon commander and his senior sergeant.  I'd prefer to have the subaltern armed with a rifle, bu that will have to happen later.  As you can see, these two leaders are on round bases.  I've decided to remount all my leaders from section/squad sergeants and up like this.  It will make them stand out better in the "chaos" of the table top game.  These are Warlord figures that came with separate heads.  I had to scrounge additional helmeted heads since I have a "thing" about front-line combat troops wearing helmets (unless of course the figure has the head already cast on the body). 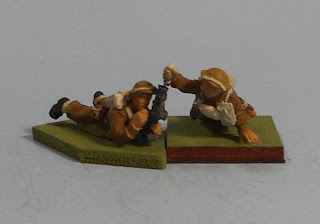 Each British platoon has a 2-inch mortar team to provide close range fire support.  Of course the 2-inch explosive shell was just a big rifle grenade so the British commonly used it for smoke missions.  I purposefully cut the angled base so the loader would be dropping the shell into the muzzle.  I'll eventually add a third mortar man as each team had a lance-corporal and two privates. 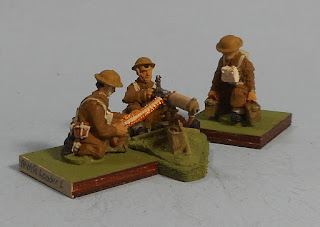 Additional heavy fire support is being provided by a .303 Vickers medium machine gun team.  Again the base has been purposefully cut so the loader's belt matches with the side chamber.  This team comes from the divisional machine gun battalion. 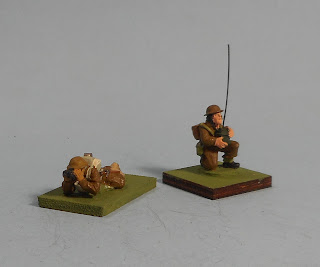 And to call in the really heavy fire support is a forward observer team of a subaltern and his radioman who can call in fires from the divisional artillery.

A look at all of the final additions.

Up next will be a fourth German infantry gruppe (squad), a few additional kampfgruppe headquarters figures, a MG 42 "heavy" machine gun team, and a 81mm mortar team, plus (I hope) a reconnaissance motorcycle with sidecar armed with a MG 42.  Stay tuned!
Posted by ColCampbell50 at 2:11 PM