As I began my reinforcement painting for my WW2 'skirmish' forces, I decided to start with a gruppe (squad) of Luftwaffe ground combat troops.  I had picked up a box of the metal Warlord Luftwaffe troops at a local convention a couple of years ago and now was the time to get them kitted out.

As many of you know, the Luftwaffe contributed some 21 division of non-flying ground personnel to the German war effort.  Originally assigned to the Russian front, they eventually fought in all theaters against the advancing Allied armies.

This gruppe will be assigned to Kampfgruppe Pitzfeld, a conglomeration of whatever troops were available to stem the incoming tide of the Allied forces in northwest Europe.

Please click on the photographs for a larger image. 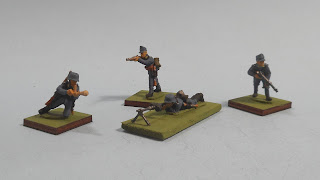 These are the first four figures that I've completed.  They wear the standard Luftwaffe blue field uniform and were the easiest to paint.  They are (from left) armed with a Gewehr43 and a panzerfaust, a standard Kar98K, an older MG15, and a submachinegun. 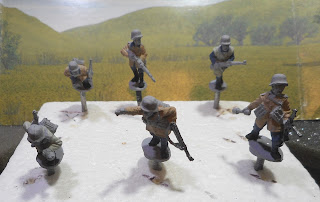 The other six figures are going to be more difficult to paint as they are all wearing either the Luftwaffe or the Heere (Army) splinter camouflage jacket or shelter.  This will be my first try at something as complicated as a camouflage outfit.  I'll post more pictures as the painting progresses. 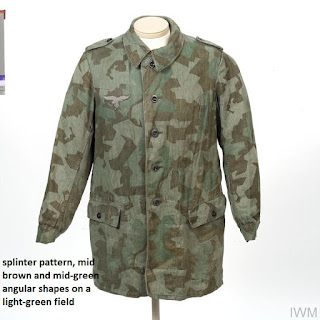 This is the Luftwaffe pattern jacket. 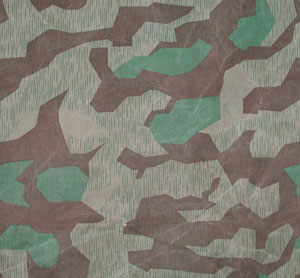 And this is the Heere pattern.

So we'll see how close I can come.  Wish me luck and a steady hand.