The Relief of Wadi Zoum-Zoum

Finally after more than a week, I'm able to post the pictures and report of my Victorian Colonial game at the HMGS-Gulf South Bayou Wars convention.  The game went well from my game master's perspective.  I hope that the various players had fun.  I didn't take as many pictures as I normally take but my friend "Electric" Ed contributed two to this report, the first and the last ones.

The scenario involved a small Egyptian force protecting a supply base at Wadi Zoum-Zoum along the Green Nile River (the least well-known and explored branch of the river in the Soudan).  The Agandar of Karres decided that raiding and destroying this base would garner him much support from the scattered remnants of the Madhi's and Khalifa's armies.  But he had Egyptian spies in his camp who passed along his plans.  The British immediately sent a riverine force to aid the Egyptian garrison repel the Agandar's attack. 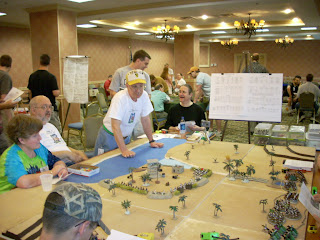 Photo by "Electric" Ed
Here we have yours truely, Col Campbell, giving pre-game instructions to the players.  The zariba enclosing the supply base is in the center, manned by its garrison, and part of the native attacking force is on the right. 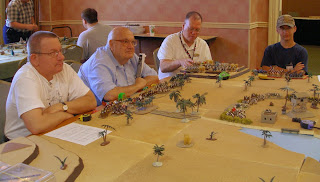 The mighty native players (from left): "Beja" Clay, "Dervish" Paul, "Agandar" Mark, and "Arab" Michael.  This was Michael's third Bayou Wars convention.  During the first he had the "misfortune" to be a British player in my massive and ill-conceived Zulu game.  I think his role in this game was more to his liking. 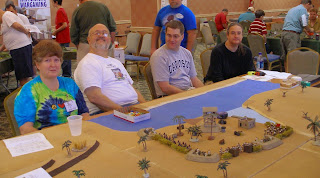 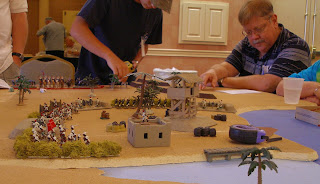 The action commences in the distance as "Cavalry" Rick (right) enters with three troops of Egyptian and allied cavalry.  "Arab" Michael begins to maneuver against him. 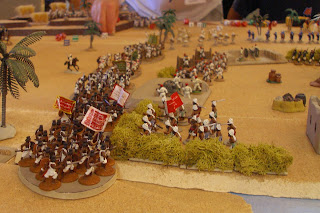 "Beja" Clay and "Dervish" Paul launch their ansars against the walls of the zariba and the artillery emplacements.  The zariba is a tangled mass of thorn bushes that can only be penetrated after it has been burned.  The attackers will begin that process at the end of this turn.  In the distance are part of the skirmishing riflemen of "Agandar" Mark's command.

The troop transports of the British relief column arrive with "Steam Launch" Jeff's two Gatling armed launches on their shoreward side. 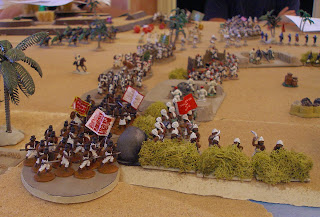 The Beja warriors succeed in lighting the zariba which the Egyptian irregular tribal levies cannot extinguish. 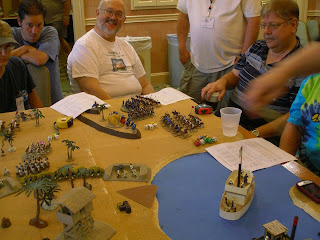 The HMS Shilleleigh of "Gunboat" Phil's command begins to fire its Nordenfelt machineguns against the Arab attackers.  In the background, "Arab" Michael's and "Cavalry" Rick's forces meet in some furious cavalry/infantry melees.  Rick was successful and defeated Michael's troops although it was a hard-fought series of engagements. 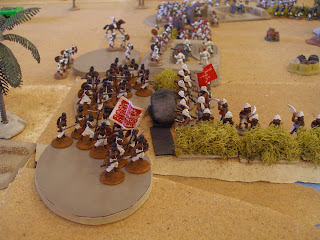 With part of the zariba burned and another part burning, the Beja warriors are ready to close with and destroy the tribal irregulars.  But unfortunately, "Egyptian" Martha's die rolls were much better than "Beja" Clay's and she repulsed several of his attacks.  "Dervish" Paul couldn't persuade his ansars to close with the Eyptian gun in the the emplacement just beyond the Beja since a lucky ball had taken his leader's head off.  Without the leader's encouragement, the ansars just wouldn't continue. 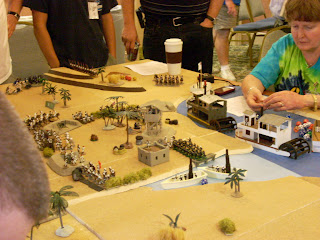 Photo by "Electric" Ed
The final actions with the British Naval infantry and Royal Marine Light Infantry, accompanied by Gatling guns, advancing through the base toward the luckless native attackers.  Even though they penetrated the gate and overran one artillery emplacement, the Agandar's force just didn't have the punch left to deal with the British.
I called the game at this point.  There was no hope that the native attackers could succeed in their mission, not with two platoons of British infantry and two Gatling guns, backed up by four naval machineguns.  Also it was drawing close to the end of game time and I still had to drive back to Jackson to see my wife who had broken her leg the preceding Friday night and was having a pin installed about the time we started the game.  (By the way, she is doing fine but still cannot put any weight on that leg for another almost two weeks.)
Posted by ColCampbell50 at 5:39 PM 4 comments:

The 1st company of the Georgiana Militia has been completed.  I did everything except the matte varnish sealer before I departed for Bayou Wars last week.  With my forced absence from work due to my wife's broken leg, I put the sealer on earlier this week and glued them to their bases yesterday.  The bases were painted earlier today.

Here are all 18 of them.  This company is primarily in lighter browns and tans.  The 2nd company will be in darker colors.  They are being outfitted at the present. 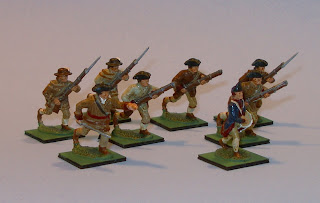 The other ten militiamen in a rough firing line.
These are RSM95 American Revolution militia that I got as a pack of 36 figures, thus the unit size of 18 (or 1/2 the pack).  These figures have minimum equipment as befits a militia organization - basically each man provides his own weapon and accoutrements.
They will join in the first engagement of my upcoming mini-campaign against the Ibernians and Gallians along the coast of the Capitania General de Florida next month.

P.S.  Thanks to all for your kind thoughts and well-wishes.
Posted by ColCampbell50 at 7:53 PM 4 comments:

But I had to leave early because my wife fell at work and broke her leg.  I've been rushing around since then.  She is doing as well as can be expected (had a pin put in the femur).

Finally, with all the preparations completed for my Victorian colonial convention game this Saturday, I can return to painting tricornes instead of topees and turbans!

Here is part of a company of 18 Murican colonial militia from the southern colony of Georgiana.  This colony borders the colonial lands of the Capitania General de Florida and thus it maintains a standing militia to guard its southern borders.  A second 18-figure company is already primed and will be started soon.

These are RSM95 American Revolution militia which I've completed the basic painting.  Tonight I'll apply the Future coating and when it is dry tomorrow, the wash of walnut wood stain, followed by a matte shellac.  They will be mounted individually on 3/4" square bases.
Posted by ColCampbell50 at 7:50 PM 1 comment: