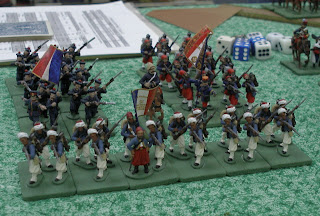 In a Franco-Prussian War battle last year between remnants of the mighty French army and the Prussian invaders, my composite French regiment saw action. Based for Larry Brom's Chassepot and Needlegun rules, this regiment has battlions of Tirailleurs Algerien, Zouaves, and Naval Infantry. The Tirailleurs and Zouaves are from Askari Miniatures and the Naval Infantry are Old Glory Boxer Rebellion French sailors. I converted one of the sailors and one of the Zouaves into flag bearers. The mounted officer is a Colonial French commander from Askari Miniatures.

Unfortunately they didn't fare very well in the battle, a report of which can be accessed here: www.angelfire.com/games3/jacksongamer/fpwar04.htm
Posted by ColCampbell50 at 9:56 AM No comments:

A recent post on the Miniatures Page asking about figures to use as Spanish troops in the War of Austrian Succession and the Seven Years War has led me to post these figure comparisons to highlight a figure range that doesn't appear well known. Vince Clyant ran the London War Room in Petal, Miss. He sculpted a range of Spanish troops that are very usable for these two wars. I hope that the pictures below will broaden their exposure. I guess that I should add here that I have no financial interest in Vince's business, just trying to help get the figures a wider audience. [NOTE: The London Warroom is, as of Spring 2009, out of business. But the Spanish figure line was bought by the Dayton Painting Consortium, maker of RSM-95 figures.  They have the line on their web site.]

From left to right, these figures are: Eureka Saxon, Front Rank Prussian, TLWR Spaniard, RSM British, Sash & Saber Prussian, and Crusade Prussian. As you can see, their heights and overall designs are compatible on the war game table. I don't think that I would necessarily use them in the same unit, but that is not necessary as every one of these ranges has all the appropriate command figures required. All but the Front Rank are just black washed bare metal. The Front Rank figure has been primed with gray Gesso and then washed with black paint. 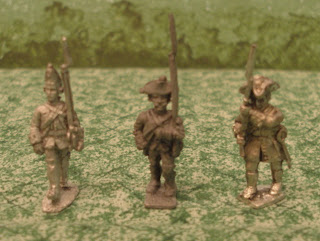 A closer look at the Eureka, Front Rank, and London War Room figures. 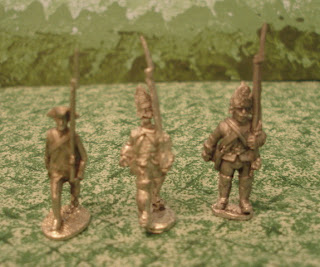 A closer look at the RSM, Sash & Saber, and Crusade figures.

So if you are looking for Spanish figures for WAS or SYW armies or as opponents for pirates in the New World in the 18th Century, if believe that you can't go far wrong right now with the London War Room Spaniards. Vince has line infantry, grenadiers, command figures, and mounted and dismounted dragoons that are usable in in the European and various Colonial troops that are more specific for the Americas.
Posted by ColCampbell50 at 8:54 PM 5 comments:

This is part of the first wargame unit I painted, back in the Spring of 1971, while I was a junior in college. They are the old Airfix Waterloo Highlanders. I used Pactra enamels and painted with a large craft brush and toothpicks for detail. Until they became too brittle for use, they were a mainstay of my British Napoleonic army.
Posted by ColCampbell50 at 8:31 PM 5 comments:

For 2008, I made a decision to keep track of the figures I paint. So here's what I did in January (all 25mm Medievals). The colored numbers designate the units and their morale class, in this case green for yeomen and yellow for peasants. We use a modified version of the old "Rules by Ral" which has three morale classes - blue for knights (mounted or foot), green for yeoman (mounted or foot), and yellow for peasants (foot only). You can see a copy on our group's web site (link below) by clicking on the Rules button and scrolling down. 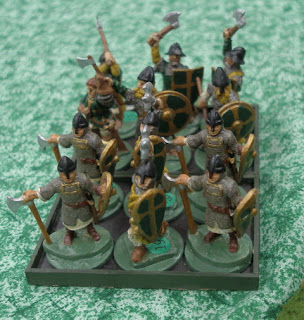 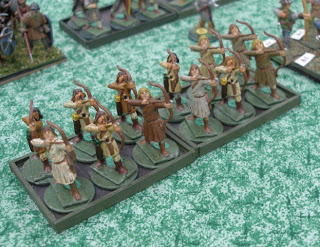 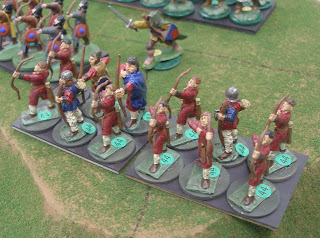 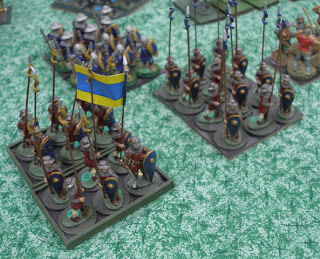 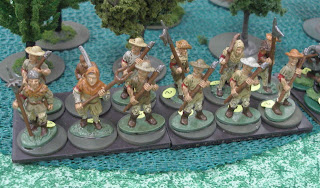 All these figures were primed with gray artist's gesso, painted with acrylic craft paints, sealed with full-strength Future floor wax, brush dipped with Ace brand Walnut wood stain, and varnished with Delta Ceramcoat matte indoor varnish. They are mounted on 3/4" fender washers and then grouped in sixes on a magnetized movement base. All these units were used in a medieval game we had today with our local wargames group
( www.angelfire.com/games3/jacksongamer ).

I also continued work on 26 25mm SYW Prussians and some assorted other figures, which will be finished in February.
Posted by ColCampbell50 at 12:30 PM 5 comments: