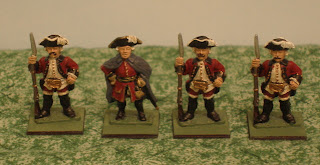 As part of a recent order of Front Rank figures, I included three Russian artillery fusiliers. After painting them, I realized that they could easily be used as musketeers in a unit depicted as standing in reserve or as guards in front of an army headquarters. This picture shows the three of them along with the Russian artillery officer, all from Front Rank.
Posted by ColCampbell50 at 2:12 PM 3 comments:

Another gaming interest of mine, among many, is the Medieval age. And in the Imagi-Nation theme, my medieval land is the Duchy of Bentwood, ruled by Duke William Worthington. The duke considers himself an independent state even though he has sworn fealty to the High King. The High King doesn't look with favor on vassals who step beyond his control. So, girded for war, the High King will soon be leading his loyal vassals into the duchy to remind Worthington of his place in the kingdom. 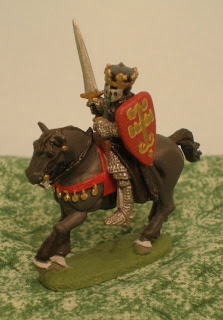 Finally I was able to take some pictures. Here we have the Margrave of Carpania's Baron Trask of Eisenmuhlen (left) and an aide de camp to Generalleutnant Baron von Stuppe (right). Both are RSM figures. Baron Trask is the Margraviate's armaments expert and a master gunner in his own right. Because he is related by marriage to the Britannian royal family, he is also a Major General in that army and wears the Britannian uniform most of the time. 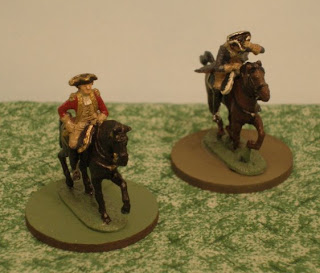 Carpania also added the Teutonica Musketeer Regiment to their army in February. These are Sash and Saber castings. I was short officer castings so they will have to be painted and mounted later.

Meanwhile, the Duchy of Courland has been recruiting as well, adding the Severinski Grenadier Battalion. The figures are Foundry and the battalion was purchased from Mark "Extra Crispy" Severin, hence its name.

Courland was also busy with its artillery arm. Here is a 12-lb field gun (MiniFig) with its gun crew of Front Rank gunners and artillery fusiliers. 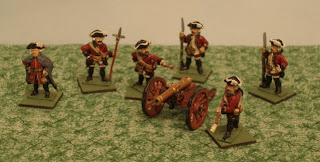 And here is a licorne howitzer (Newline) with its crew of bombardiers and artillery fusiliers from Front Rank. 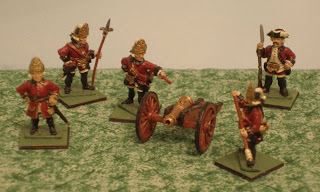 And for March, I'll be finishing the Courland 12-lbr (still have to put the matte glaze on it) and two mounted officers (the Duke himself and his son, who will command all the grenadiers) as well as some Courland cavalry.

No pictures yet, but I completed the following figures in February:

26 Carpanian (AKA Prussian) musketeers of the Battalion Teutonica (Old Glory)
2 Carpanian mounted officers - one will be Baron Trask of Eisenmuhlen and the other is an aide-de-camp to GL von Stuppe (both RSM).
24 Courland (AKA Russian) grenadiers of the Battalion Severinski (Foundry)
4 gunners, 4 bombardiers, and 3 artillery fusiliers (Foundry) for Courland
1 Licorne howitzer (Newline) for Courland

These were fewer than I had hoped to paint, but after all February is a shorter month.
Posted by ColCampbell50 at 8:43 AM 3 comments: