Russians, Saxons, and French, O My!


Just completed some more 25mm units for my Napoleonic forces.

First up we have the 1st Battalion, Pavlov Grenadier Regiment, of the army of the Czar.  Due to its heroism in 1807, it was authorized to retain the miter helmet (and did so until WW1).  In April 1813, the Pavlovs were given guard status and transferred to the Imperial Guard and renamed "Pavlovski".  According to most valid data, in the 1813 period only the grenadier company wore the taller grenadier miter while the three fusilier companies in each battalion wore the shorter fusilier style miter.  But since Hinton Hunt and Der Kriegspieler did not make a fusilier miter back in the 1970s when I acquired the figures, all of them are in the taller miter helmet.  The flag is from the Warflag site and is the 1803 pattern for the regiments of the St. Petersburg district.  I believe that during my time frame (1813) they were still using this flag and not the new issue guard flags. 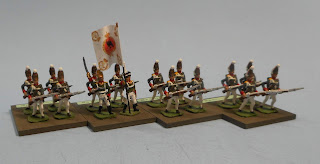 Second is the Saxon foot battery #3 which will support my small 6-battalion Saxon division.  This battery has Miniature Figurine gunners and Scruby/Historifigs guns.  The battery had four 6-lb guns and two field howitzers.

Since the Scruby/Historifigs 6-lb guns are slightly under "scale" I've used their 8-lb models which, to me, look good.

Third is a regiment of the French guard cavalry - the Guard Scout Lancers or Eclaireur-lancier de la Garde Imperiale.  Although this cavalry component of the French Guard wasn't raised until late 1813 and into early 1814, I've had three of the stands since the mid 1970s.  Recently I acquired two more figures and was able to finally complete the regiment.  This is the first guard cavalry unit I have in my French forces, but it may not be the last. 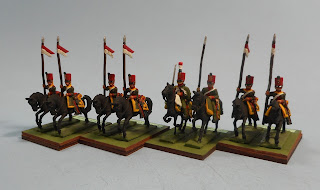 The three stands with pennants on the lances are the original figures, being early Miniature Figurines with horse furniture sculpted on the riders.  The other stand with the officer are late Miniature Figurines with the horse furniture sculpted on the horse.  Since they are bigger than the early ones, I've added a "booster" base onto the older ones to get them up to the same height.

More Napoleonics in future posts, including a leger battalion from the Kingdom of Northern Italy and a Russian musketeer regiment in overcoats.
Posted by ColCampbell50 at 3:24 PM