Back to Painting in the "Back of Beyond"

After an almost two month painting hiatus, I knocked off some additional figures for my forces in the "Back of Beyond" China in the 1920s/1930s.

The first batch are two Cannon Fodder (no longer in production) Chinese I picked up from the collection of my late wargaming buddy Mark "Doc Ord" Stevens.  These two will reinforce an already painted unit of ten warlord Chinese.  I still have to terrain the bases. 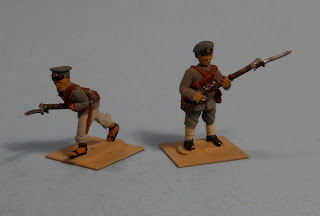 The second batch were also picked up from Mark's collection.  They are a disparate group of Russian Civil War infantry that will constitute a unit of mercenary White Russians living in China after being chased out of "Mother Russia" by the Communists. 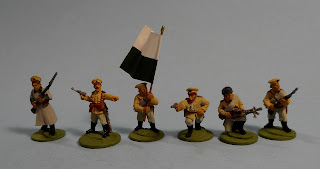 The soldier and officer to the camera left of the banner bearer are Brigade Games RCW figures while the remaining four are from unknown manufacturers.  The banner bearer and the rifleman on the far right are from the same sculptor.  The banner is patterned after the flags carried by the White forces in Siberia.  These bases will also get a terrain treatment in the near future.
They will be joined by a medic and a group of twelve White "shock" troops, also Brigade Games figures.
I'm happy to be able to get back to the painting table after so long!

Labels: Back of Beyond